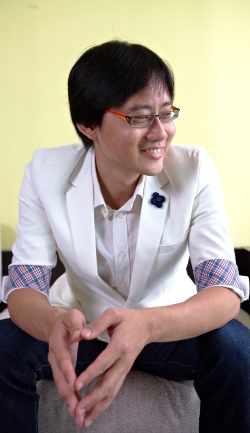 Composer-conductor Albert Tay is founder & director of the Kodály Academy of Music Singapore (KAM). Under his leadership, the KAM team successfully organized the inaugural Asia Kodály Symposium held in Jakarta, Indonesia. KAM has also engaged the Singaporean community through various education and performing arts workshops under its “Studiorum Series”.

As a composer inspired by literature and different art forms, Albert seeks to (re)create works that are evocative and engaging. His eclectic tastes have also resulted in creations that range from the theatrical and avant-garde to audience-friendly pieces. Many of his commissioned works have been premiered and showcased worldwide in concerts and competitions by decorated and outstanding artists, conductors and ensembles in major music cities. Albert’s composition mentors include Young Artist Award winner Dr. Zechariah Goh (Head of Composition, NAFA), Cultural Medallion winners Dr. Kelly Tang (Arts Dean, School of the Arts SOTA) and composer doyen, the late Leong Yoon Pin.

Albert is Artistic Director for the Schola Cantorum Singapore, a choir collective that has attracted trained musicians, composers, educators and choral enthusiasts from all walks of life. The largely Singaporean choir has an international outlook with members who hail from 15 different countries. Albert has been conducting school and community choirs for nearly 15 years, working with singers ranging from 6 to over 60 and abilities spanning amateur to professional levels.

The busy musician has commissioned and premiered numerous Singaporean vocal and choral compositions. With a predilection for contemporary avant-garde, multidisciplinary performances, Albert has taken choral performances to new artistic territories, as well as helped numerous choirs surmount challenging music through fun, Kodály-inspired music activities, winning top prizes and reviews in international festivals. His choirs have performed repertoire that spans the gamut of genres, epoch and scale – ranging from classical to popular music; contemporary art music to Renaissance masterworks; a cappella gems to operas and large-scale choral-orchestral works such as the 3-hour live-to-screen projection of the ‘Lord of the Rings’ with the Metropolitan Festival Orchestra.

For several years, Albert was a trainer for music teachers and conducted the STAR Teachers Choir for the Ministry of Education at the Academy of Singapore Teachers (AST). Currently Associate Faculty at SIM University, he taught choral conducting at the Nanyang Academy of Fine Arts (NAFA) and continues to be an adjunct lecturer there. Apart from giving music and choral workshops to conductors, music educators and choirs in Singapore and abroad, he has been mentoring youths and conducting youth community choirs on a pro bono basis.

Albert was conferred the prestigious International Kodály Society Scholarship for his masters in Kodály Music Pedagogy at the Kodály Institute of the Liszt Academy of Music (Hungary) where he studied conducting, voice and piano. His thesis and thesis defence were given top scores by the panel of professors at the Kodály Institute, graduating “Excellent with Distinctions”. Albert’s seminal research paper on Leong Yoon Pin’s choral works delved into the pioneering composer’s choral works and was further developed upon graduation from NAFA as part of a National Library Board project and is now housed at the NAFA and National Institute of Education (NIE) library. Albert is a recipient of the National Arts Council (NAC) Georgette Chen Scholarship and the NAFA Scholarship for his Diploma and Bachelor (Hons) studies at NAFA where he graduated with distinctions as one of the top students of his class.