25 August 2009 is a milestone in Singapore’s choral history.  Led by 4 renowned Singaporean conductors, a tour de force of 12 school and community choirs came together for an unprecedented gathering to pay tribute to Singapore’s pioneering composer, performing to an appreciative full-house crowd at the Esplanade Concert Hall in a concert aptly titled “Leong Yoon Pin – A Choral Odyssey”.

This featured composer is Mr. Matthew Leong Yoon Pin (b.1931), a respected educator and conductor who is best known for his voluminous output of choral music as well as myriad instrumental works that run the gamut from symphonies, overtures, concertos to chamber works.

Leong’s choice of text shows a predilection for poetry ranging from the Chinese classical greats such as Li Bai (李白) and Du Fu (杜甫) to modern English nationalistic poetry by local poets such as Angeline Yap.  His choice of texts is born of a natural affinity for the two languages and filtered by the political climate of the late 1950s – choral songs from China were banned and Leong’s compositions answered the need for choral repertoire that was free from political overtones.

Leong’s choral works cover a huge spectrum of subject matter and his writing often accommodates the needs of the different commissioning ensembles or government agencies – from the accompanied to the a cappella; from short choral gems to large-scale cantatas; from original compositions and arrangements that employ traditional forms to those that explore the avant-garde and boundaries of diatonicism (see “When Will the Flower Blossom” Figure 1); from very local Singaporean themes, dialects, languages and sounds to very universal ideas, philosophies and languages.  Many of his best and most colourful choral writing came about as a result of the active commissioning programme by the SYC Ensemble Singers (formerly “Singapore Youth Choir”).

Works such as “Dragon Dance” (舞龙) (See “Dragon Dance” Figure 2) or “Frogs in the Rain” (雨中蛙) employ a great deal of onomatopoeic phonemes with little or no Chinese texts in the piece and are musically accessible to any choir seeking repertoire from South East Asia.  Figure 2 below shows such use of onomatopoeic phonemes readily identifiable with Chinese instruments used in the dragon dance – “Chinese cymbals” q=[tsiaŋ], “drum” d=[doŋ].  Pieces such as “Azure Sky” (碧云天) are in English, with the text translated from Northern Song Dynasty Verses by the composer himself.  (See “Azure Sky” Figure 3). 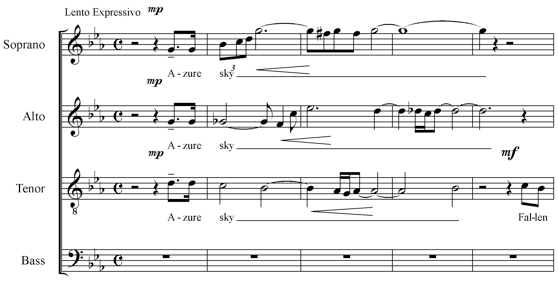 The Chinese-speaking Metro Philharmonic Choir (星市合唱团), formed in 1959 from the made-defunct Rediffusion Youth Choir (Singapore’s first Chinese radio choir also founded by Leong), led to a partnership that has spanned 50 years.  Metro Philharmonic Choir served as Leong’s lab choir, premiering many of Leong’s works.  As a result, he has a good understanding of the voice and his compositions are idiomatic and comfortable for the amateur singer.  Much of his music is characterized by an economy of means, seldom needing multiple divisi to fully realize the extent of his unique harmonic language.  The Metro Philharmonic Choir recently celebrated its golden jubilee by programming a series of Leong’s works in recent concerts.

Leong’s music is truly Singapore’s musical heritage – his music is a record of the lost sounds of Singapore’s everyday life, music that reflects the multi-lingual and multi-cultural society of Singapore and is a textbook example of how politics, society and culture can shape the music of one’s country.  There is little doubt that Leong Yoon Pin’s music is truly, Singapore’s choral legacy.

Copyright © 2009 Albert Tay.  All rights reserved.  No part of this article may be reproduced or distributed in any form or by any means, or stored in a database or retrieval system, without the prior written permission of the publisher.  All score excerpts used with kind permission from the composer.

Albert Tay is a conductor based in Singapore.  A fateful meeting with Mr. Leong Yoon Pin in 2002 led to a series of informal curry fish head lunches and attendance at various concerts that showcased Leong’s works.  Whilst studying at the Nanyang Academy of Fine Arts (NAFA), Albert’s graduation research project was titled “Leong Yoon Pin and His Choral Music – Singapore’s Choral Legacy”.  This was later expanded post-graduation at the request of Dr. Eleanor A.L Tan as part of the National Library Board’s National Online Repository of the Arts (NORA) project and is now housed in the NAFA library.

Addendum: This article was written for the Asia Pacific Choral News Network at the request of Ms Jennifer Tham.  I have decided to repost this article in memoriam of Leong who has since passed away on 13 April 2011.  Requiescant in pace.